Multifunctional Downtown: a concept based on the IT sphere

Events, fun, hangouts, and a working environment for the employees of one of the largest IT companies in Armenia. Here is how Downtown Multipurpose Space by Imageman Studio was born.

The background of this space is far away from what it is now. Earlier it was a famous Soviet garage cooperative and a car service center serving Central Committee cars. To go towards modern design was the decision made by the designers.
Today’s Downtown is not designed in any particular style: the exterior is industrial, but the interior is a combination of a loft, a groomed industrial techno style, with notes of muted glamour and some futuristic focuses. Inside everything can be transformed for any purpose and in any format. 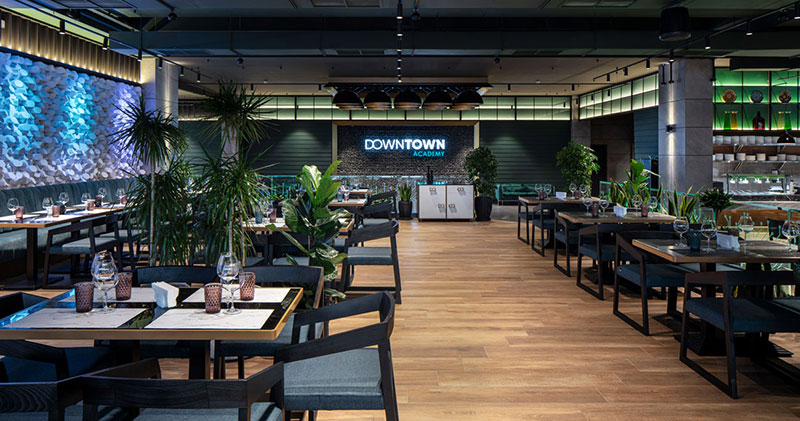 So let’s take a tour of this multi-purpose space.
Guests enter the space with a massive reception desk, on the left side of which is a children’s room, on the right, the Auditorium. Here the conferences, lectures, screenings can be held. 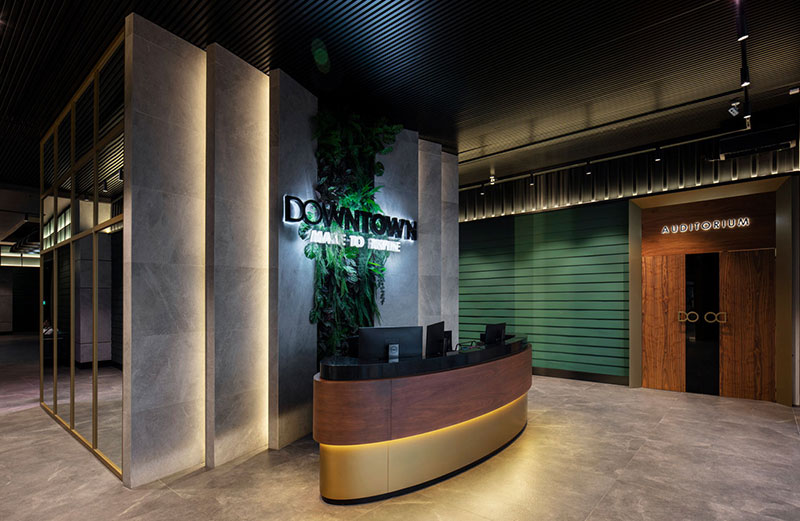 But who would like to go somewhere where it is not possible to take a good selfie?
I bet, not the greatest part.
The selfie wall is just behind the reception, decorated with natural plants and neon lights with a slogan “Downtown – made to inspire.” In front is a green velvet sofa.
In the lobby area, there is another unusual lattice wall full of tons of stones. Behind that wall, there is the Downtown Academy, where Digitain trains its staff. It is for both children and adults who come here with the same in mind: to connect their future with IT. Two offices, separated by an accordion wall, can be transformed into one large room if needed. 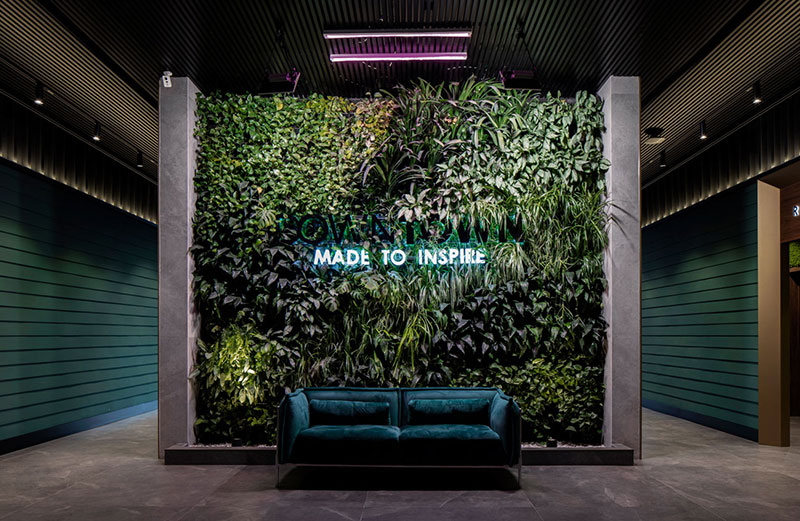 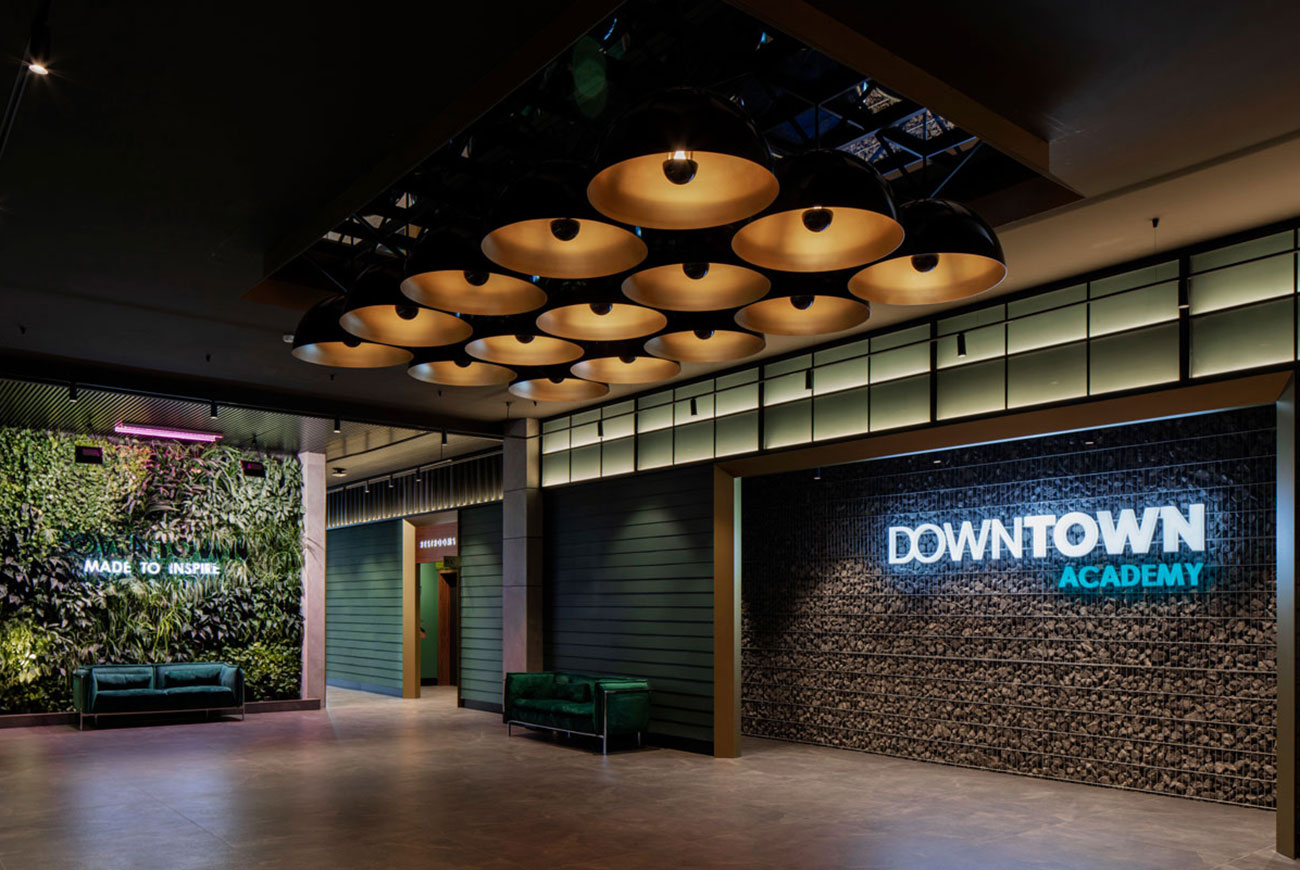 Downtown can be visually divided into 4 zones: a cafeteria zone, an open kitchen, a bar, and a “secluded” cafe, but the latter can be called a VIP zone.
Downtown begins with a “cafe,” where the potted plants serve as an element of zoning. The seats are all the same green velvet, and the tabletops are of natural stone. The toilet is arranged with the same materials as the main hall: a green wooden wall, big lamps, and natural stone washbasins. 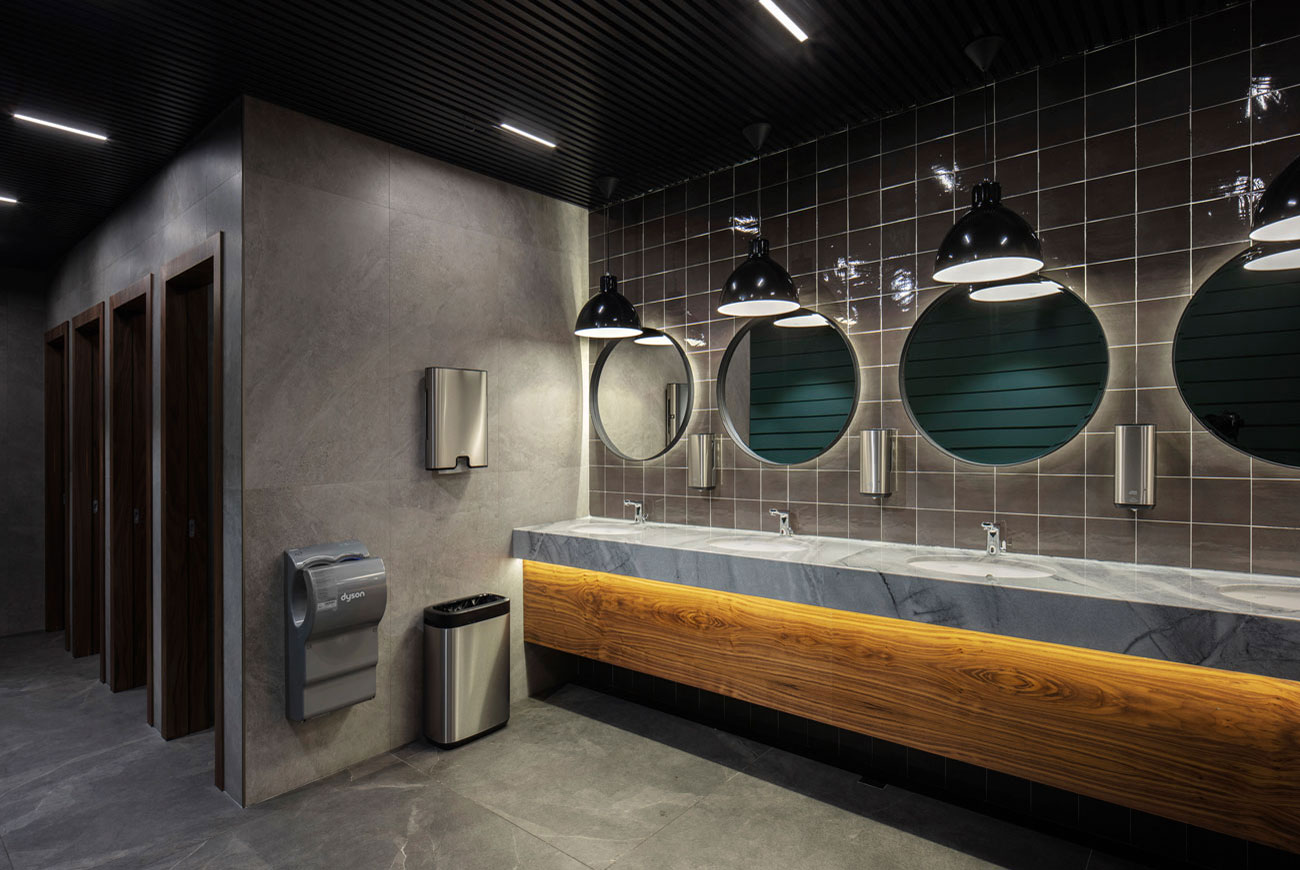 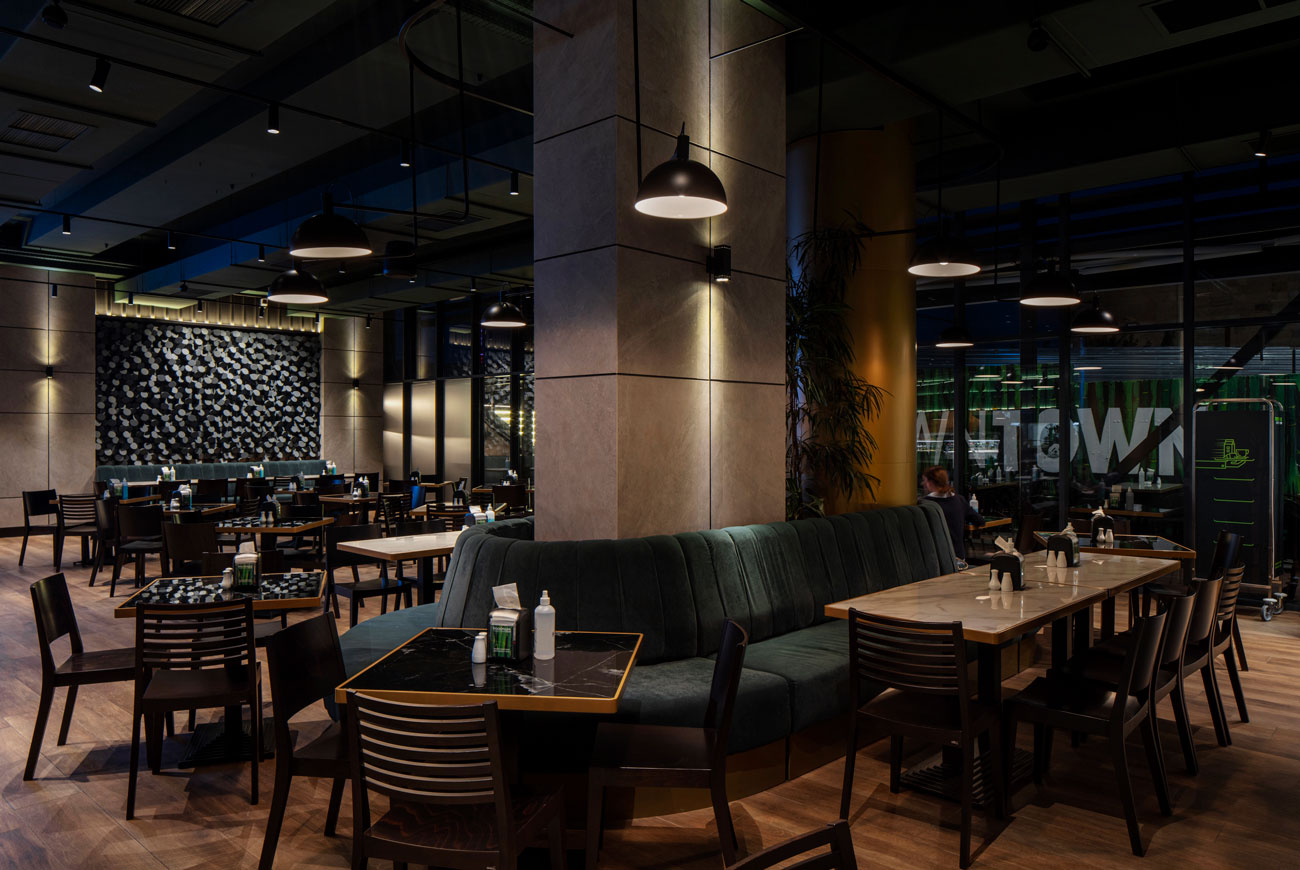 The creative director of Imageman Studio, Mikayel Karsayn, wanted to add something unusual to put the wall out of monotonousness. The conceptual solution was the design of the 3D panels, exclusively developed by Mikayel Karsyan and produced by the Wall Deco company.
When asked how the idea of the wall design was born, the author of exclusive wall panels and the head of Imageman studio Mikayel Karsyan answered:
“We wanted to create an environment resembling an IT center and somehow display cells, neurons, pixels, to give some creativity and originality.
We deliberately chose a soft cycle shape and created a wall of small cylinders of different depths and lengths, cut at the same angle, though installed in different directions. Here, the essential factor is the light: we managed to get a spectacular play of light and shadow, a creative image that differs from various angles”. 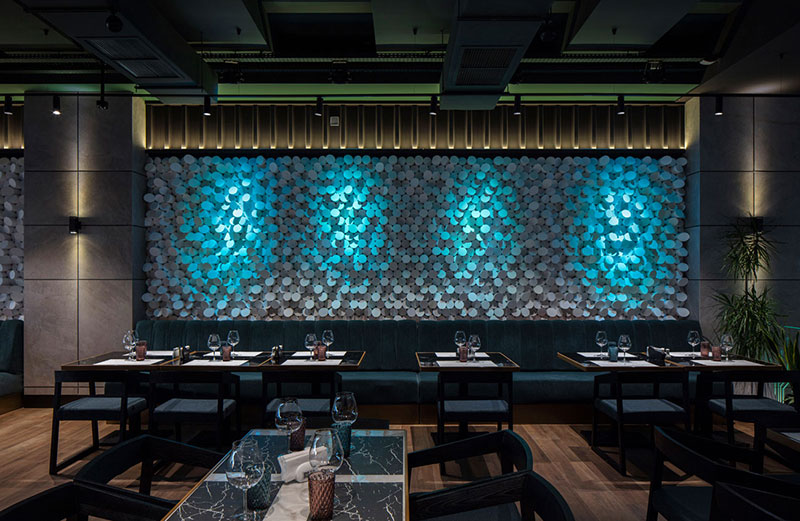 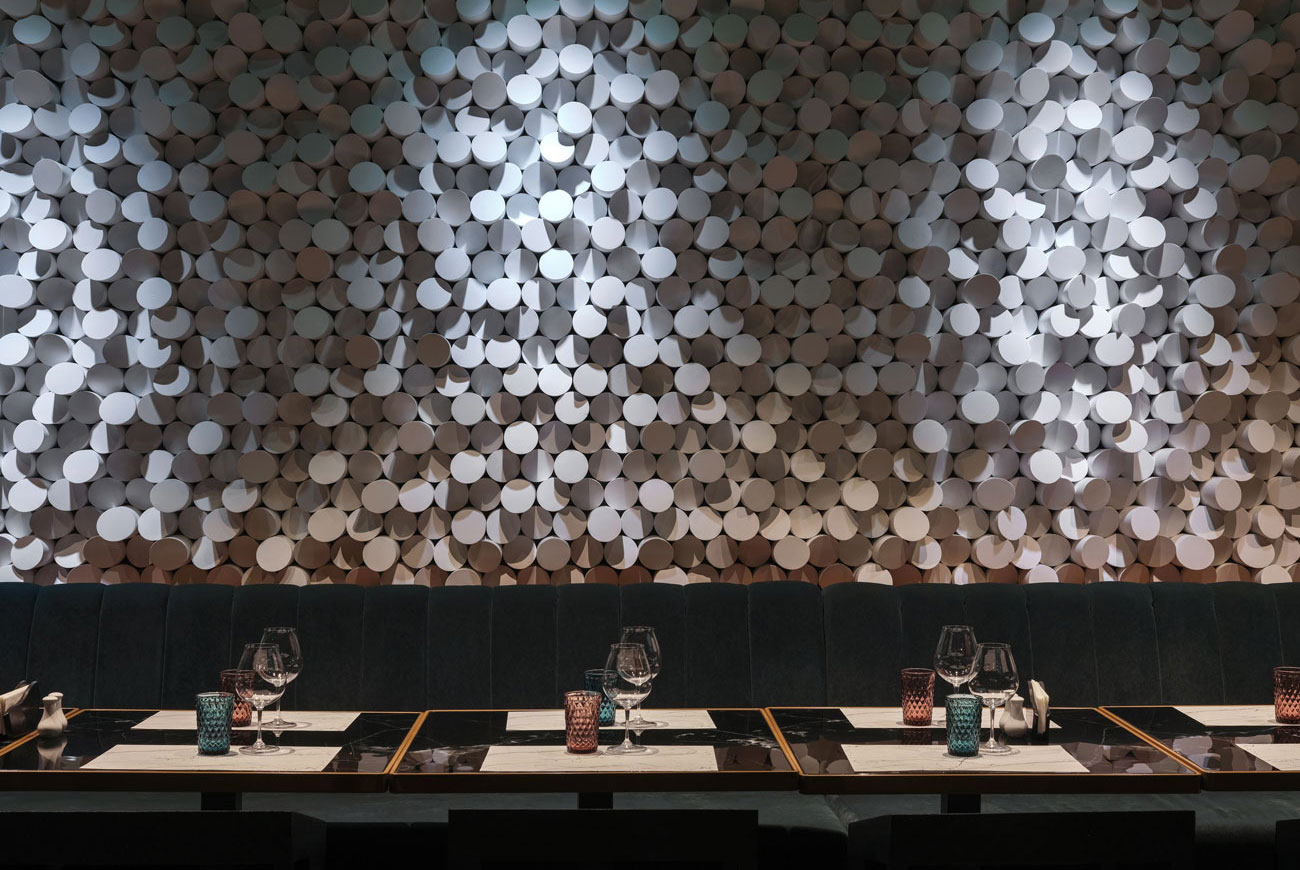 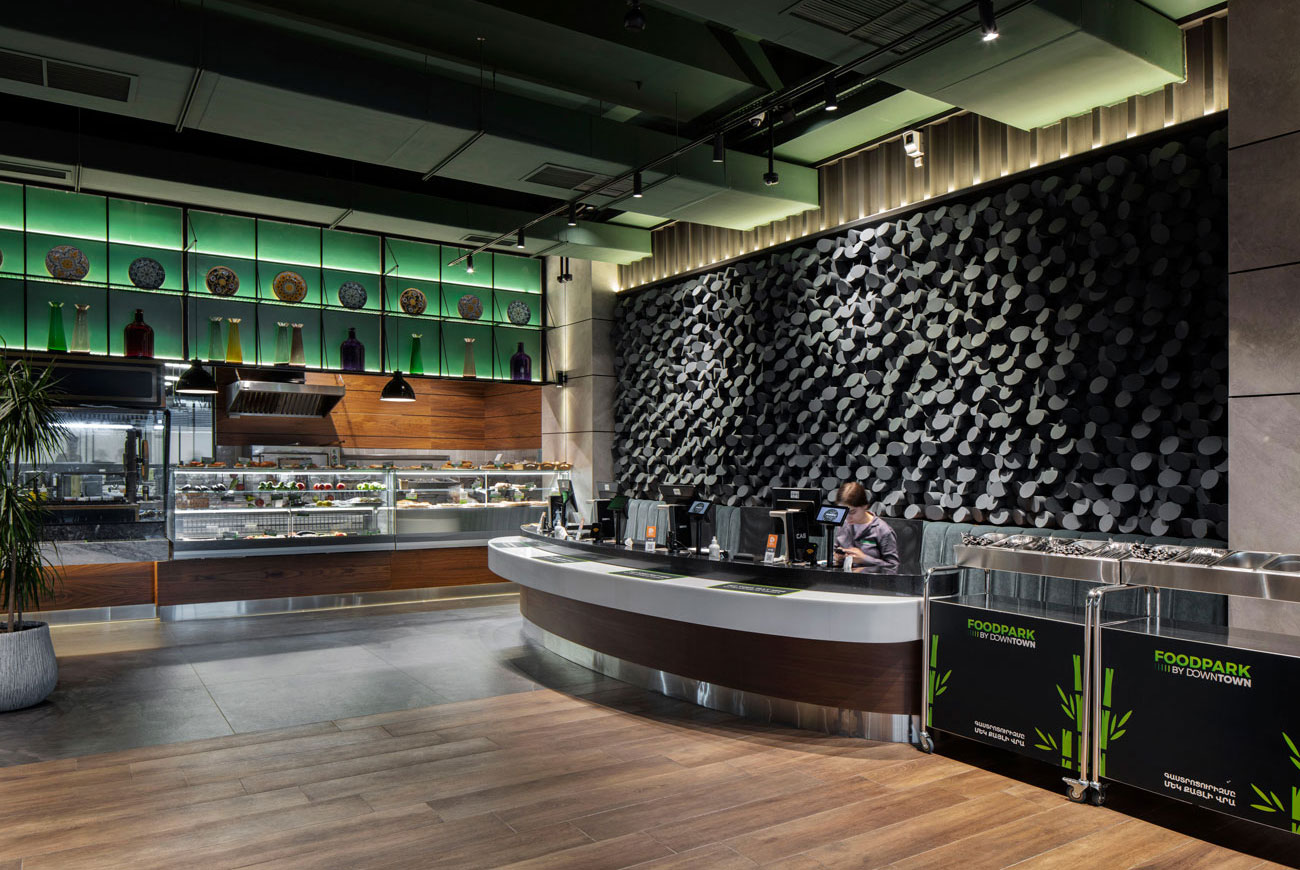 Downtown’s high-tech open kitchen is equipped according to the latest trends. The dining area can be transformed into any space for any event at any time.
Downtown is a multifunctional event center. During the day, it is a cafeteria for the employees, a restaurant and a club in the evenings, and a family pastime on weekends. Let alone the fact that it offers a cycle of events from conferences to coffee breaks for businesses.
The Imageman team reflected the interior concept of a high-tech company and achieved the most multifunctionality of space.